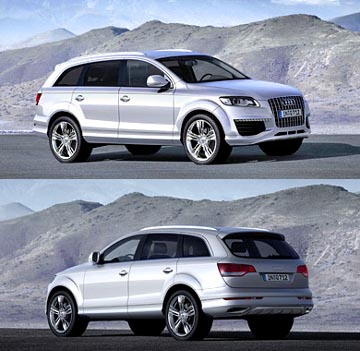 When you were younger, you may have looked into a hot hatchback or sports coupe so that you could take it for a rip down the drag strip on the weekends. Now that you have a family — with all the gear that accompanies that lifestyle — you need a larger vehicle and, well, a minivan just isn’t all that hip. Taking a glance down the SUV choices on the market, you’d be hard pressed to find a more fuel efficient, more powerful option than the 2007 Audi Q7. It’s being thrown around as “the world’s most powerful diesel passenger car”, fitting right in with the fuel-sipping TDI line from Volkswagen.

Under the hood, you’ll find a monstrous 6L V12 that’ll develop 500 horsepower and 738 lbs-ft of torque, more than enough umph to get you to the supermarket and back. Heck, you can probably beat out some of those weekend warriors at the track, ’cause the Q7 only takes 5.5 seconds to reach 60mph from a standstill. The top speed isn’t too shabby either at 155mph.