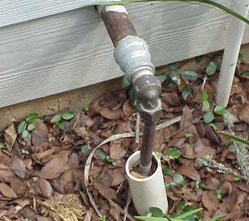 Most of us are familiar with the broadband battle, which is currently being fought between phone and cable providers. But have you thought about pipes?

At least one company has done exactly that, and further, they have developed technology to deliver broadband and TV signals through natural gas pipes. The company Nethercomm, a start-up from San Diego is advancing the idea of Broadband in Gas, or BIG.

This BIG idea seems to be a natural, as did broadband over power line. Most homes have both power lines, many more have natural gas pipes, although those are prevalent as well. Especially those who live in rural areas that aren’t exactly primary targets for Internet providers could benefit from such service.

One might think that BIG would require utilities stringing fiber cable through existing gas lines, a process that might be prohibitively expensive, although Nethercomm says some California utilities are already doing it. Instead, Nethercomm is banking on an ultrawideband transmitter that is linked to an existing Internet or pay TV device at the gas company’s headquarters. Customers would have a receive connected to their existing gas meter.

Field tests are planned in 2007 for San Diego, Chicago, and Atlanta.