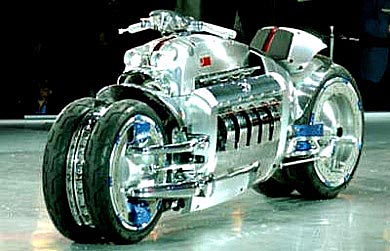 Typically, motorcycles are a bit more maneuverable than their four-wheeled counterparts, but what happens when you put four tires on a bike and mate it with a monster engine? The experiment known as the Chrysler Tomahawk, an incredible motorcycle powered by a 500hp V10, is ready for production and will soon be available for sale.

It’s not the lightest bike on the market at 1,500 pounds, but understandably so. After all, it boasts the same 8.3L engine as the Dodge Viper, giving it the ability to rocket up to speeds of over 300mph. Its 0-60mph time is just 2.5 seconds.

When roaring down the race track with this sick ride, you can’t exactly say that you’re two-wheeling, because there are a pair of wheels (separated by a few inches) on the front and the back, all four of which have independent suspensions.

All that power won’t come cheap, however, as the Chrysler Tomahawk is even more expensive than the Dodge Viper. Still want one? Be prepared to shell out $250,000.