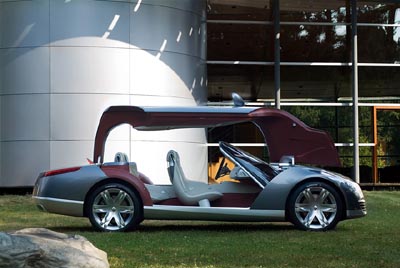 Citroen made some pretty big waves yesterday when pictures of the C-Metisse surfaced on the internet, but they’re not the only ones coming out with innovative designs. Sister company Renault has got a rather unique automobile of their own in the Nepta Concept, a four-seat convertible where “the entire sides of the car can lift up in a gullwing-like fashion”.

The front and rear doors are fused together as one, along with a fairly substantial portion of the hood. When the side lifts up, it provides easy access to both the front and rear seats (all of which are “bucket” style).

From the front or the rear, the car doesn’t have anything particularly groundbreaking, but that’s not to say that it isn’t attractive; quite the contrary, in fact, as this is quite a streamlined-looking sports car.

There’s plenty of jump powering the Nepta, with a V6 developing 420 horsepower. This allows the cabriolet to do the 0-62mph run in 4.9 seconds. Other key features include LED head- and tailights, carbon bodywork, anti-roll bars, DVD screens, and advanced turbulence deflectors.

Check out a video at the the provided link.