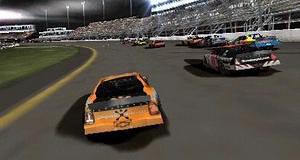 One of this summer’s biggest box office blockbusters was Talladega Nights: The Ballad of Ricky Bobby. Let’s face it, after we all saw that movie, we were enthralled by Ricky Bobby’s life-defining mantras: “I want to go fast”, and “If you’re not first, you’re last”.

If you’re feeling that same need for speed, but want to satiate that hunger everywhere you go, then surely you won’t be disappointed with EA’s NASCAR 07 for the Sony PlayStation Portable (PSP).

Destined to be a hit with rednecks and trailer park boys alike, NASCAR 07 immerses you in the high-speed environment of 180mph left turns, surrounded by 43 other competitors. You’ll also enjoy some nifty effects like screen blurring and camera shaking.

Those of you who already have the PS2 or Xbox version of the game probably won’t find too much new here, but if you still “want to go fast”, then you’ll be able to do it on the PSP come September 8th. Now if only I could find the Wonder Bread car.