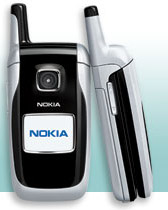 Tired of keeping track of your Nokia phone by model number? The Finnish phone maker has heard you.

Beginning soon, Nokia phones will be known publicly by names rather than model numbers. In a nod to competitors, who have seen strong sales of such models as RAZR and chocolate, Nokia will use letters, not numbers, for future models.

“What you will see coming from us in the future is not just a numbering system, you are going to start to see names that carry a meaning and are important to consumers,” said Nokia marketing chief Keith Pardy.

Just this week, Nokia took the wraps off three new phones, all of which have four-digit model numbers. Motorola, maker of the RAZR, also has SLVR and PEBL among their offerings.
It’s not immediately clear whether the naming conventions will apply to all new models. And whether Nokia can come up with names that evoke emotional responses—like chocolate—seems to be the biggest question. If anything, owning a new new Nokia phone should be a bit more fun.