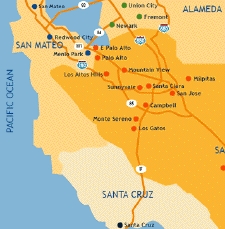 It seems obvious that the Silicon Valley would be at the front of the line when it comes to embracing new technology, so it isn’t surprising to hear that the entire valley is about to become one massive WiFi hotspot. We’ve seen city wide systems before, but the Wireless Silicon Valley Task Force is looking to take that to a whole new level. The hotspot will cover more than 1500 square miles, covering ground all the way from San Francisco down to Santa Cruz, which is 60 miles away. The plan is to have free, advertising supported service available for local residents, with a premium charged for higher bandwidth apps like VoIP of streaming video.

The WiFi system is being installed and operated by Silicon Valley Metro Connect, a consortium made up of IBM, Cisco and several others. Notably, Google isn’t included in the group, even though their headquarters of Mountain View falls within the area.