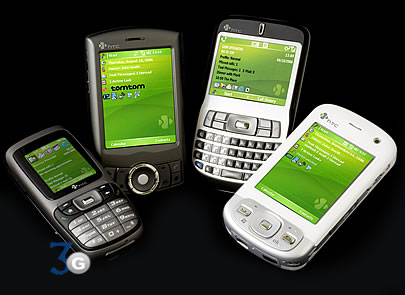 HTC could have just rolled out one new PDA, but they got truly crazy and unveiled four at once instead. The new models carry some catchy names – HTC S620, HTC P3300, HTC P3600 and HTC S310. Each is targeted at a different consumer.

The S620 is ‘super-slim’ and will be the choice of heavy e-mailers, with the flexibility of quad band GPRS/EDGE, WiFi and Bluetooth. The P3300 is what you will want if you are prone to getting lost. It is HTC’s first dedicated navigation PDA and it comes with TomTom navigation software. The P3600 is a multimedia machine. It has 3G connectivity and is HSDPA ready, allowing for speedy connectivity and all that that will let you do. Finally, the HTC S310 is the small and simple smartphone choice for personal and commercial users who don’t need high end performance.

HTC has lined up European carriers for their new offerings, which will be available in later September or in October, depending on the model. No word on when, or if, the devices will expand outside of Europe.