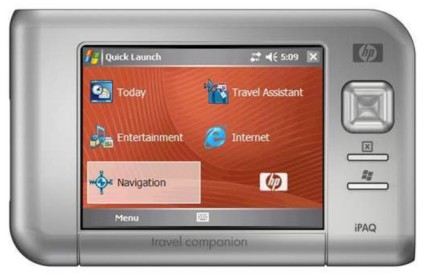 We were introduced to the new HP iPAQ rx4000 earlier this week, we just came to learn that the model will be a regional product available in the APJ [Asia Pacific Japan] market. It is not available outside of select countries in APJ.

However, HP has already released a newer and bigger member of the product line. The rx5915 is known as a ‘Travel Companion’ because it adds a SiRF Star III GPS Receiver to the range of entertainment options available in the rx4000. The new device has a large 3.5 inch QVGA touch screen, a 9 way directional pad and 2 Windows Mobile buttons, which let you maneuver easily through everything that the 400MHz Samsung processor throws at you. It has 64MB of RAM and 2GB of onboard flash memory (memory seems to be a variable option). It is Bluetooth 2.0 friendly for easy connection.

It’s not entirely clear where HP plans to market this new device, but clues indicate that we should see it in North America at some point. The rx5915 is expected to cost about $600.