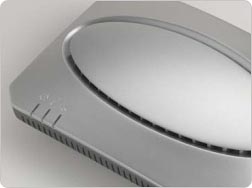 Normally, when we discuss something surrounding 3G on Mobile Magazine, we’re talking about the latest cell phone to come out of Korea or Japan. That isn’t the case today.

As 3G mobile broadband technology becomes more prevalent, more and more people are going to be using it to access the internet everywhere they go. But what if you want to share? This is where the femto3G access point comes in.

The femto3G access point connects to an existing HSDPA service (like that offered through Cingular) and broadcasts it out to nearby users. The range is about the same as a standard wireless router, blanketing the average home in glorious 3G broadband.

Receivers of this signal need not be 3G ready either, because this femto device can “tap into existing IP-based networks to let computers with more conventional network hardware take advantage of 3G Internet access”.

Sweetness. Too bad we’re not hearing anything about price or availability.