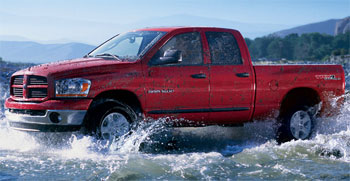 We have another major vehicle recall, and this time it is Chrysler that has the headache. The company has recalled 145,000 2006 Dodge Ram 1500 trucks and 35,000 Dodge Durangos made between 2001 and 2003. Drivers need not fear, as the issues would only effect a passenger. The Rams will have their passenger air bag system replaced and the computer which controls the air bag system reprogrammed. While they are working on the vehicles they will also replace the passenger seat belts because the current installation is not necessarily compatible with some rear facing child seats if the seat is pushed all the way forward.

The older Durangos are being recalled because of the potential for a fire to start between the two front seats. I didn’t realize that the Durango used a Sony battery.

The recall is starting immediately. No estimate is available from Chrysler yet about how much this recall is going to cost the company or how long it is going to take to fix all 180,000 vehicles.