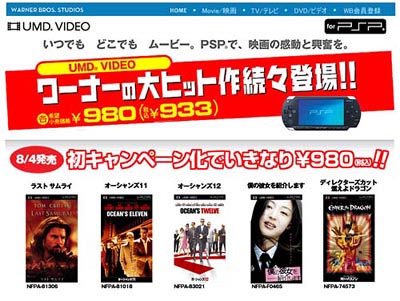 People said that UMDs were doomed from the beginning, because they were a propriety movie format that would only work on the Sony PSP. It certainly didn’t help that they were pricing the discs around the same as a full-fledged DVD. It may have taken them nearly two years to figure it out, but following a substantial price drop, UMD movies have been flying off the shelf in Japan. Sales have increased ten-fold.

If you walk into the average electronics store in the US or Canada, you can still expect to pay a rather hefty price for a UMD, but over in Japan, Warner Home Video has introduced a “permanent sale”, bringing the price down to 980 yen (about US$8.50). Keep in mind that a DVD movie in Japan can cost 5000 yen, so the relative price is that much lower. It’d be like buying a UMD for five bucks here, about the same price as renting a DVD.

The “sale” has been extended to a wide range of films, including such classics as Enter the Dragon and The Goonies, right up to more contemporary hits like The Last Samurai and Ocean’s Eleven.