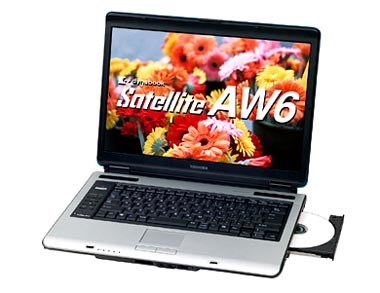 When you read the spec sheets on most mid-range laptops, they are start to sound like carbon copies of one another. The Toshiba DynaBook Satellite AW6 is the latest in this trend, but I guess it’s better to have a reputation for having reliable laptops than ones that burst into flames.

The features on the DynaBook Satellite AW6 won’t exactly floor you, but there’s enough going on here that you won’t walk away disappointed. They’ve included the latest Intel Core 2 Duo T5500 (1.66GHz) processor to keep everything speeding along. You’ll get 1GB of DDR2 memory, graphics via the NVIDIA GeForce Go 7600 card, a 120GB HDD, and a DVD Super-Multi drive. This list is an exact duplicate of the Hitachi PN39K1S we reported on earlier today.

The Toshiba DynaBook Satellite AW6 started shipping yesterday with the price set at $1,717.