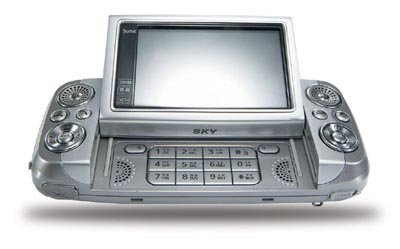 No one at Pantech will probably like me saying it, but I know you’re all thinking the same thing: The IM-U140 bears a little too close a resemblance to the T-Mobile Sidekick. It’s a little porkier, but for good reason. While it may lack the QWERTY keyboard of the Sidekick, the IM-U140 packs in the largest screen (2.6-inch wide QVGA) on any S-DMB handheld in Korea.

Whenever you’re ready to watch some glorious satellite television, just press a button and the huge LCD automatically pops up at a 30 degree angle. Oh, and did I mention that the display is a touchscreen… that vibrates?

We already know the video will be great, but with four channel stereo speakers, the sound can’t be far behind. Rounding out the features are an integrated MP3 player, 3MP camera, electronic dictionary, and PictBridge support.

Look for the IM-U140 to be marketed under the SKY brand later this month. Yes, Korea only.