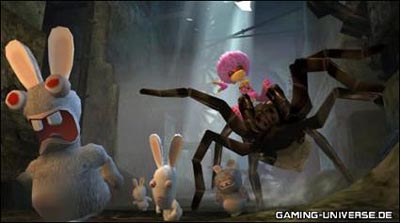 When you think of video game icons, the same few characters inevitably come to mind: Mario, Sonic, Ryu, and others. Some may include Rayman among that elite list, and just like other video game franchises, you need to mix it up to keep your fans interested.

Rayman has traditionally been an action-adventure kind of game, be it a 2D side-scroller or a 3D platformer. However, Rayman Raving Rabbids for the upcoming Nintendo Wii will rather be a series of mini games. But guess what, you can go portable with them too because Raving Rabbids is confirmed for the DS.

The expectation is that the title will play in much the same style as, say, WarioWare with frantic “twitch” gaming. Ubisoft hasn’t indicated how they will be taking advantage of the DS’s unique touchscreen interface or if (and how) the DS version will interact with the Wii version.