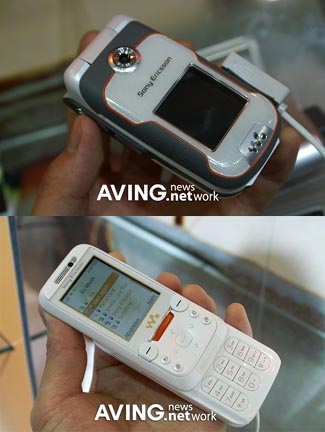 If anybody is leading the charge with the infiltration of musicphones, it’s got to be Sony Ericsson with their unmistakable Walkman line of cell phones. Tune-jamming and head-bobbing feature most prominently here, and the folks at SE are gearing up for a couple of new additions: the W710i and W850i.

The FM radio touting W710i looks like many of the company’s other entry-level Walkman phones with its simple clamshell design and loop antenna. This phone will take on the usual suspects — MP3, AAC, AAC+, and eAAC+ — but apparently not WMA. This quad-band GSM/EDGE unit comes bundled with a 512MB Memory Stick Micro.

Want more? Then take a look at the beefier W850i with its Walkman 2.0 Music Player and TrackID. Rounding out its features are a 2 megapixel camera with digital zoom, high-speed UMTS, and bundled 1GB Memory Stick Micro.

Both handsets are being showcased at IFA 2006 in Germany, but the phonemaker has yet to make an official indication pertaining to prices and launch dates.