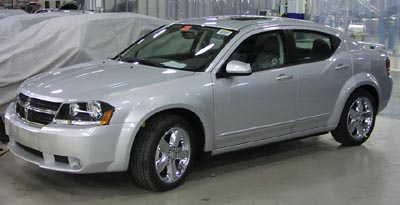 Either the people at Dodge are really smart or they’re running out of ideas, because the front end of the new Dodge Avenger is immediately recognizable as being part of the same stable as the Magnum, Caliber, and all those pickup trucks.

I guess we have to hand it to the designers as they have really defined the brand’s image; the 2007 Avenger R/T is a Dodge through and through. Although we’re still waiting on the Paris Motor Show later this month for the official unveiling, we managed to come across a few sneaky pictures of this Sebring sibling.

Dodge has always had a “grab life by the horns” perspective, and the Avenger R/T is much more muscular (more masculine even?) than the more subdued Sebring. No other deets — like engine size, features, and pricing — have been confirmed at this point.