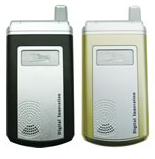 The Wi-Fi phone market is beginning to take off.

We’re not talking Skype here. This is a bit different. It’s the F3000, the latest VoIP clamshell from UTStarcom. It gives you cellular and Wi-Fi capabilities in the same phone, with a host of protocols thrown in, including the prevalent 802.11b/g. Perhaps the most exciting feature is the Auto-Search function, which finds Wi-Fi networks nearby and stores them for later use.

Users can access the interface in four languages (English, French, Chinese, and Spanish). Other common features include a security suite including caller ID blocking and call rejection (whether caller is known or unknown).