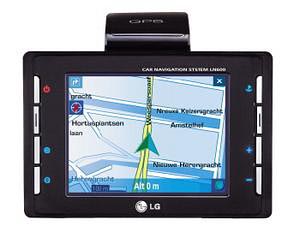 Remember when MP3 players first hit the market? They quickly became very popular, despite their (then) miniscule storage capacities and lacklustre feature sets. The same level of market penetration is slowly building for portable GPS units, and LG wants to strike the pan while it’s still hot. It’s too bad that there is little to set the LN-600 and LN-700 apart from the competition.

The LN-600 boasts a fairly subdued black shell, but the blue-lit buttons rock a little bit of personality. The 4-inch touchscreen makes for an intuitive interface, and everything should be speeding along with the Samsung ARM9 300MHz processor running the show. Maps come by way of NateQ and Destinator, but this unit only has SiRF II. You’ll also find internal speakers, 512MB of memory, and turn-by-turn voice guidance in ten languages.

Very little is know about the LN-700, but I suspect it will be much the same as the 600, except with a few other bells and whistles. Hopefully they prove me wrong.

No word on pricing, but both GPS units are expected to hit UK shelves at some point.