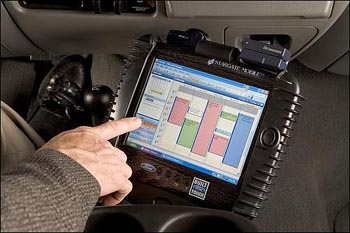 Ford is offering a new dealer-installed option which can turn your ride into an office on wheels. The FordLink is a tablet computer which was developed by Ford in partnership with Microsoft and Azentek. The FordLink features wireless internet connectivity, and it mounts to a docking station on the dash which lets it tie into the vehicle’s built-in navigation and audio systems.

The device runs on Windows XP and is full featured, so you can run anything on it that you could run on any XP machine. The FordLink is designed as a working machine, though – ports allow for the easy connection of a credit card reader, printer, digital camera and other peripherals to let you work seamlessly on the road. It has a touch screen which can be viewed in bright sunlight and is durable to stand up to the abuse it will inevitably face.

The FordLink, targeted at contractors and others who work out of their truck, will be available in all 2007 F-Series trucks, and in the 2008 Super Duty. It will cost about $3,000 without any extra options.