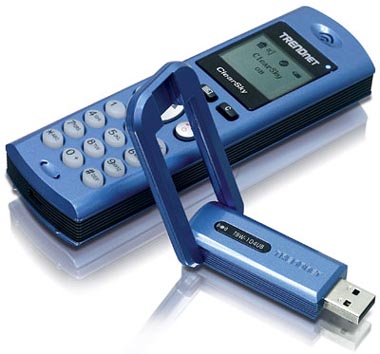 The bigger names in the home networking game may be D-Link and Linksys, but TrendNet wants to be a major player as well. Looking beyond routers and network cards, TrendNet recently released its ClearSky Skype handset and based on early reviews, it works very well, even if it isn’t the prettiest phone on the block.

It’s a bit of a shame that it doesn’t pack in WiFi connectivity, so are you bound to your home PC in order to make and receive Skype voice calls. That said, you can go wireless via Bluetooth 2.0 (you have to use the supplied adapter), complete with a handset clad in a metallic blue shell.

The ClearSky is a little on the basic side of things, with a four-line monochrome display, a simple two-way navigator, and a 700mAh battery that gets topped up via mini USB. You’ll get more than six hours of talk and over 60 hours of standby on a full charge.

The TrendNet ClearSky Bluetooth Skype phone is available now for about US$110.