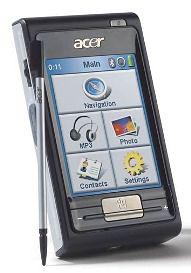 IFA 2006 Germany may not elicit the same kind of response as CEBIT or CES around these parts, but they’re saying that it is the “world’s largest Consumer Electronics trade fair”, and as such, there should be plenty of goodies kicking around. While most people would probably turn to the likes of Garmin (or similar companies) for their portable GPS needs, Acer doesn’t want to be left out the picture, unveiling the Windows-powered e310 handheld at IFA.

The e310 is just a smidget bigger than a pack of cigarettes, making it one of the most portable GPS devices out there. Rounding out the features are 64MBs each of RAM and flash ROM, an MP3 player, photo viewer, and USB 2.0 connectivity. Battery life is rated at 4 hours of GPS navigation or 8 hours of “normal use”. No pricing information was made available.