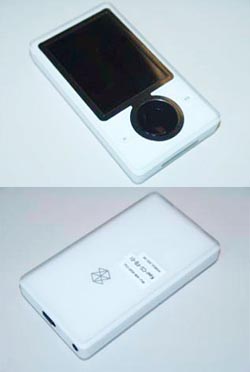 When it comes to challenging Apple in the world of digital audio players, it’s not exactly a task that you should take lightly. As a single entity, you stand little chance of usurping the almighty iPod and its 75% market share. We’ve been hearing lots of news trickling in about the Zune, but now it seems that Microsoft isn’t going in alone: if recent approval pics from the FCC are to be believed, the media player is going to be Toshiba-made.

The application on the FCC’s website came from Toshiba, indicating that it is their product, but this thing looks exactly the same as the Microsoft Zune spy shots that have filtered through the internet, right down the Zune logo on the back. Everything else about this “HDD portable audio player” remains the same as you’ve been hearing, including the 802.11b/g wireless network adaptor, FM tuner, 30GB hard drive, and 3-inch LCD. It’ll do both music and video, and will be available in three colors: white, black, and brown (interesting choice, don’t cha think?).

Will this Toshiba-Microsoft alliance have enough of a punch behind it to de-throne the iPod? We’ll see.