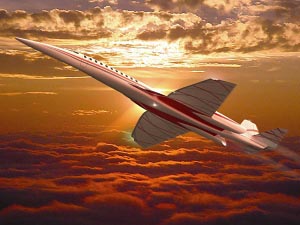 A new jet from Lockheed Martin will make traveling across the country a pleasure. If you can afford your own private jet, that is. The new supersonic jet, called the QSST (for Quiet Supersonic Travel) will be able to go coast to coast in the U.S. in just two hours. To do that, the jet travels at speeds up to Mach 1.8.

When the Concorde first introduced us to civilian supersonic travel, one of the problems was the deafening sonic boom when it passed the speed of sound. This jet has a boom that is barely a pop – less than a hundredth of that for the Concorde. It accomplishes that with a patented new inverted V-tail design. That will make this design far more popular in the American market.

The $80 million price tag for the QSST may seem extreme, but it isn’t really too bad in relative terms. The Concorde cost $46 million when it debuted in 1977. That’s $150 million in 2005 dollars, so the QSST is a bargain.