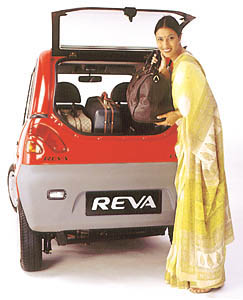 Talk about a little car.

The Reva is an electric car that’s not much bigger than a Smart Car. In fact, that’s what it resembles the most. It comes standard with GPS navigation and does plug-n-play with MP3s and other data files. Perhaps most notably, you can get it in one of more than 2,000 colors. (Now that sounds like customizability.)

In case you’re wondering, the company claims that it’s a safe vehicle, with dent-proof body panels, side-impact beams, and a steel frame. I wouldn’t trust that safety report if you’re in a car-vs.-truck, but that would probably be the case in any vehicle smaller than a truck.

By the way, if you’re in the market for one of these, be advised that that picture is of the prototype and that the model is scheduled to be sold initially only in Malta and the U.K.