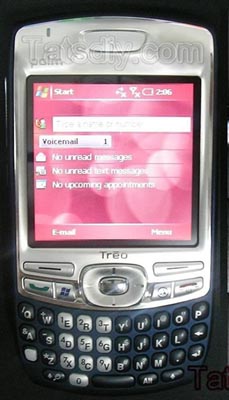 When we first caught glimpse of the Palm Treo 700w, we were wowed by the Windows functionality and then sorely disappointed by its eventual problems with dropped calls and such. The crew at Palm answered that with the release of the Treo 700p, running off of the more familiar Palm OS. Well, it seems that for their next offering — the Treo 750 — the people at Palm are going to give Windows another chance, and along the way, they’re going to throw in a few other changes to encourage you to upgrade.

The casing now appears to be a dark blue, and they’ve switched the color scheme on the QWERTY keypad, opting to make the numbers white (rather than the black we’re used to). The one change that I really like (and it was a long time coming) is that they have eschewed that fugly thick antenna, going for an internal signal-finder instead. This provides for a much more streamlined look, and I’m definitely a fan of that.

As this is simply a “leaked” photo floating around the interweb, we’re still waiting on any kind of official word about the rest of the specs, as well as pricing and availability info. Stay tuned.