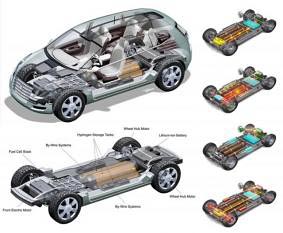 GM showed off a hydrogen fuel-cell concept vehicle called the Sequel at an auto show last year. The only problem was that the Sequel didn’t actually work. That’s changed now.

Yup, it’s more than just a “concept” now. The Sequel has been put into working order with a range of about 300 miles, and journalists will be able to see it and try it soon.

GM has had earlier fuel cell vehicles – the AUTOnomy and Hy-wire – but the Sequel has a much larger range and accelerates twice as quickly as those early attempts. That means it can go from 0 to 100 km/h (~60mph) in under 10 seconds while just spewing steam out the tailpipe.

GM is not hesitating to pat themselves on the back, calling the Sequel the first fuel cell vehicle that has been produced that has range and performance within the range that people would expect for reasonable use. They are, of course, still a long way away from producing these vehicles, but they are already working on the replacement for the Sequel.