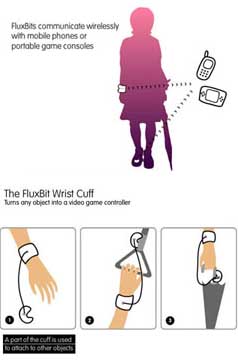 Can you wear your video game controls? You can if they’re FluxBits.

It’s a wearable game interface with an open design philosophy at its base. It’s not exactly standard issue or big-budget yet, but it does evoke ideas of meta controllers, especially ones that you can keep on you so your game-playing experience is truly mobile.

FluxBits are wearable meta controllers that can communicate wirelessly with mobile phones or with portable game consoles. Each piece of the puzzle links to an overall mobile device, in this case a wrist cuff. The cumulative effect is that FluxBits can turn everyday objects into in-game controls.

Nowhere near your joystick? No problem. You can use an umbrella instead, although it might be more practical to use a mobile phone or a PDA. You can also use the whole thing as a location-based gaming service. Common public things like telephone booths or handles on buses and subway cars can become game controllers, with scorecards listing high scores for you and your friends. In this way, FluxBits makes possible an incredibly novel multiplayer gaming service.

It’s all a concept still, but the designer seems confident that it will become a reality soon enough.