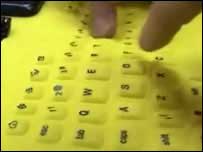 Italy and the U.K. are getting on the “smart fabric” bandwagon.

Luminex, an Italian company, is making shirts, pants, and shawls packed with cabling and high-efficiency LEDs that really light up a room. The most-mentioned use of this clothing is at night or in other situations with low visibility, such as smoke-filled rooms or foggy streets. The lights are interwoven into the clothing, for efficiency of use. (This might make washing and drying a challenge, though.)

The U.K. entry is from a company called Eleksen, which is marketing a touch-sensitive fabric that can adapt itself to common keyboard functions, such as typing letters or adjusting audio. This technology could lend itself to a PDA pouch that doubles as a keyboard.

This kind of clothing and software fabric might become routine sooner rather than later. Unfortunately, they might also become targets for theft. Still, such innovations are exciting to contemplate.