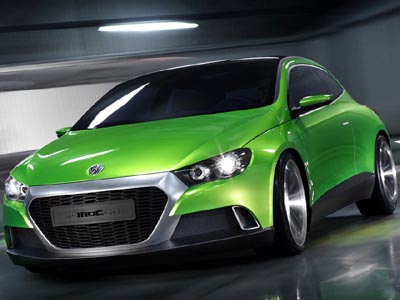 The Scirocco is a legendary vehicle in its own right, earning itself a cult-like following among the race-ready segment of Volkswagen owners. We’ve been eagerly anticipating the re-birth of the hot hatch and now some official images have finally emerged. Currently dubbed the Iroc Coupe Concept, this two-door coupe is set to make its triumphant debut at the Paris Motor Show next month.

They may call it the Iroc, but we know better, so I’m just going to call it the Scirocco. After all, by all indications, this concept vehicle will eventually be tweaked and touched up as the 2008/2009 Volkswagen Scirocco coupe.

Current word on the street has the ‘rocco boasting a 210hp TSI engine, DSG gearbox, front-wheel-drive, 19-inch alloys, 2+2 seating, 5-point racing harnesses in the front, and hidden B-pillars. When it goes on sale in 12 to 18 months, the suggested retail price should be in the $25k range. Check out the link for more pics, or wait until September to get a look at the car “in the flesh” in Paris.