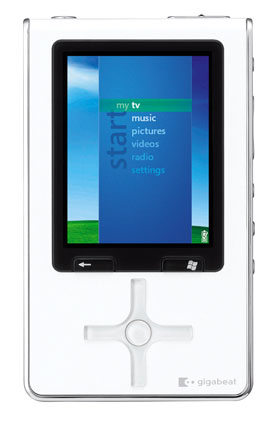 It seems every day that about 10 or 20 new DAPs (digital audio players) appear on the market, but try as they might, the iPod reigns supreme. The behemoth known as Microsoft has been trying to get into the market for a while now, with various portable media centers made by Creative and others, but besides a few media junkies getting into the fray, they haven’t seen wide success. Even big Dell just recently folded their brand of DAP devices.

Enter CES 2006 – during his keynote speech, Bill Gates announced Microsoft’s first real serious challenger to the iPod, their new Portable Media Center software, and the first device to use it, the Toshiba Gigabeat S (MES30VW). It’s a 30GB, or 60 GB player, the size and shape of an iPod, which also plays videos, and does it well.

After the conference, Toshiba stated that they’d break it out on the public in March. Well, that came and went, and here we are in the summer just finally getting the chance to enjoy this little player. Was it worth the wait? For the most part, I’d say so.

The Gigabeat S comes in at $369.00 (CAD) for the 30 GB model (in white), and $469.00 for the 60 GB (in black), which places it pretty well against its poddy competition. When you open up the box you get several different cables that’ll allow you to connect to your computer, or your home theatre (or audio system) without much trouble at all. As well as an AC adapter and headphones of course.

The player itself is actually quite a bit lighter than what you’re used to with an iPod, coming in at about 127 grams, vs. about 136 for the iPod. This actually makes the device seem a bit hollow though, and doesn’t exactly instill in you a sense of durability. That’s not to say that the device is poorly made, far from it. It has a very nice glossy plastic front panel with the familiar Toshiba cross control method, a very large 2.4” 320×240 TFT LCD screen, and the back is clad in aluminum.

On the bottom of the player you’ll find the AC adapter jack, a battery on/off switch, as well as a dock that I’m sure in the future Toshiba will be licensing different attachments with which to work with. On the top side of the unit there’s the AV-out/headphone jack, as well as a hold switch.

Over my time with the device I tried to run it though as many different scenarios as possible. Being an MTP (Media Transfer Protocol) device, the Gigabeat requires at least Windows XP and Media Player 10. When using MP10 I ran into several problems transferring music, and converting movies from DiVX and the like. This isn’t necessarily a fault of the device and more so that of the MTP process and MP10. When I upgraded my player to MP11 I found the process much more streamlined, but still not as slick as the iTunes interface, or just using self-administration via Windows Explorer (I know, I ‘m a luddite, but I like my control).

Speaking of the interface, the new Portable Media Center software is very slick. Microsoft has done a very good job tailoring it to the device, and I am actually in favor of it over the iPod’s software. The integration of the media center feel, as well as the features provided with showing album art are quite nice to look at and do a good job showing off the screen.

Actual features wise, besides just Mp3s, videos and pictures, the Gigabeat also includes a FM tuner for those that still like to listen to the radio from time to time. And although there is no fully adjustable equalizer, there are several pre-selected settings, and they work alright, though I mostly stuck to the “none” setting.

When playing around with the device and putting it through its paces I ended up getting around 12 hours of continuous playback if I was audio only, and only about 3 hours with all videos. Not exactly that great for a DAP/PMP, and if you do a mix of the 2 you can look at even less time.

Also, during my time I did end up with 2 notable problems. First off, the aluminum backing has printing on it, with the company name, model number, etc… the usual. After only a few weeks of relatively little handling, the print started to wear off in a section. This really made the device seem a little cheap. The second problem I had was again with the whole MTP setup. When transferring some songs my WMP crashed, and my Gigabeat didn’t seem to register that the transferring process was over, so I ended up unplugging the USB after 10 minutes or so. At that point, the system acted as though it had no battery power left. Even after plugging in the AC adapter I couldn’t get it to turn on, and as a last resort I plugged in the USB again after a restart of my PC, and the PMP sprang back to life. Maybe it won’t happen to everyone, but I was actually able to replicate it, so it’s something to definitely watch out for.

All in all, my time with the Gigabeat was pretty enjoyable. I think it’s a very viable alternative to the iPod, and watching videos on the screen was very nice compared to the experience found on the iPod video. Although I had a few hiccups here and there, and Media Player 10/11 isn’t really the best choice for device management, I think that if you’re in the market for a new DAP you might want to give the Toshiba a look.

Cons:
– Not an iPod (not as many accessories)
– Short battery life for a DAP
– Messy media management system via WMP
– Can crash, especially when working connected to USB