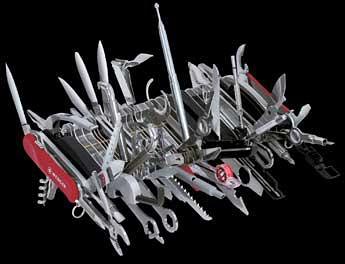 The Swiss Army knife has always had more features than you knew what to do with, but the latest model unveiled by Wenger, the knife’s maker, takes that to the extreme.

The company has unveiled a Swiss Army knife with 85 different instruments, which is practically every one that has ever been included in an earlier knife. They are calling it, logically, the Giant Knife Version 1.0.

Included in this monster red wonder are 7 different knives, a wrench for the spikes on your golf shoes, a laser pointer that has a range of 300 feet, and a rivet setter to repair your bike chain. It even has a cigar cutter. Those features and 74 more are packed into a knife that is nine inches long and weighs more than two pounds. That’s certainly not as easy to carry around as other Swiss Army models. I also doubt that airport security would let you carry that baby on with you.

A knife this big doesn’t come cheap. You have to order it specially from Wenger and it will run you a cool $1,200.