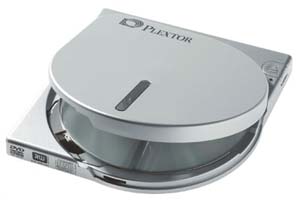 If it looks small, that’s because it is. It’s the PX-608CU, an innovation from Plextor that the company says is the world’s smallest DVD writer.

Indeed, the device is a hair’s breadth larger than a disc itself, making it ultimately portable. You can record on all DVD formats, including dual-layer media, at speeds of up to 8x. And, in case you’re wondering, it also does CDs, burning readables and/or rewritables at up to 24x.

It connects to your PC via a USB 2.0 cord and gets its power from the PC, so that USB cord is the only one you’ll need.

Plextor has also launched an internal version, the PX-608AL. Both models will be available in October, with a price yet to be determined.