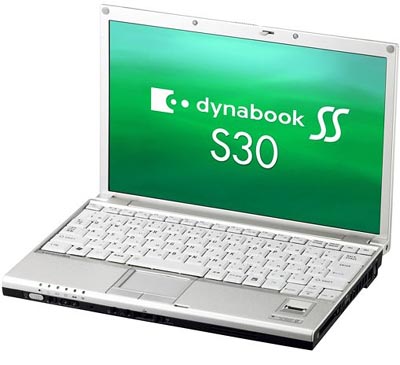 Toshiba’s newest sub-notebook is tiny and it offers an amazing amount of battery life. The Dynabook SS S30 weighs in at just 1.2 kg (2.6 pounds), which is small even for the Dynabook line of Windows XP Pro notebooks. Toshiba promises that the battery will last you for 9 hours, or 13.5 hours with the extended battery. That number is obviously exaggerated like every battery life claim is, but even a reduced figure would be better than most devices.

The Dynabook SS S30 packs a fair bit into a tiny body. It has an Intel Core Solo U1300 at 1.06GHz, 512MB of RAM (which you can boost to 4GB), and a 30GB hard drive (which you can make twice as big if you need to). It has a built-in fingerprint sensor for added security (or to act out your spy fantasies). The 12.1-inch WGA screen isn’t huge, but the widescreen setup makes it seem bigger than it is. 802.11 a/b/g is also built-in.

The computer will be available in Japan initially, and it won’t exactly be bargain basement priced at about US$2,275. Small size and long battery life don’t come cheap.