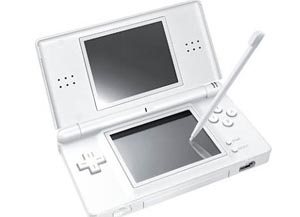 The portable video gaming market has traditionally been dominated by a plumber in red overalls and the rest of the crew over at Nintendo. They stomped right over the Game Gear, Atari Lynx, and even today, the Sony PSP is having a hard time keeping up. Sure, they may have essentially buried the Game Boy Advance, but the Nintendo DS is absolutely thriving, especially the Lite version. Here are a few video games that have made the dual-screened gamer such a hit.

It should come as little surprise that Mario Kart DS tops the list, being touted as the “killer app” for the NDSL. Drifting boosts, furious red shells, and a gorilla racing a dinosaur never looked so great, especially given that this is easily one of the most popular DS titles that makes use of Nintendo’s (free) Wi-Fi Connection.

While the rest of the gaming community might tell you to go get Metroid Prime Hunters, this list goes on to describe four “unconventional” games: Brain Age, Animal Crossing: Wild World, Trauma Center: Under the Knife, and Magnetica. Honourable mention goes to a few other titles, but personally I can’t wait to get my hands on Star Fox Command.