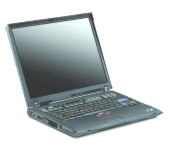 Lenovo, which recently took over the venerable IBM line of notebooks, has announced that it is including the Cingular Wireless WWAN service on one of its ThinkPads. This, in addition to the Verizon Wireless EvDO service already being included, gives you the ThinkPad user the capability to transcend traditional hotspot needs.

You’ll need that ThinkPad to be the T60, of course, since that is the only model so far to have both functionalities. Other models are soon to follow, in what is expected to be the vanguard of a charge toward WWAN in the coming years. A recent study estimated that sales of WWAN-equipped notebooks will reach 20 million by 2010.

Dell and Hewlett-Packard are in the WWAN game as well, although they offer either Cingular or Wireless, not both.