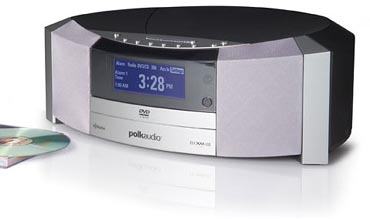 I’ve always had a certain level of respect for the Polk Audio brand. Although I wouldn’t place them in the same league as say a Denon when it came to high-end audio equipment, Polk Audio has always held its own. Their designs never come over the top, screaming at the top of their longs, flying into your face like an aggressive telemarketer. No, instead they always oozed with an understated elegance that said, “I know I’m good stuff, and I don’t need to tell you that.”

In the same line of thought comes the Polk Audio I-Sonic tabletop radio. On the surface, it looks rather plain, but under the hood, you’ll find functionality up the wazoo. Take a deep breath. This audio device will take on AM, FM, XM Satellite Radio, CDs, DVDs, HD Radio, MP3s, and even your iPod. That’s a lot of aural entertainment at your fingertips.

The I-Sonic is certainly a step up from the standard clock radio, but it still does the standard things like wake you up in the morning (with multiple alarms) and lull you to bed (with a sleep timer). The asking price, however, is anything but standard at $600.