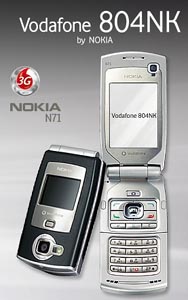 Europe has been enjoying the Nokia N71 with its techie squareness and nifty picture-taking features, but now the people of Japan will be able to get the same pleasure from their version: the rebadged Vodafone 804NK. As you’d suspect, this phone will be available through Vodafone Japan, and it remains largely unchanged after travelling across the continent.

You’ll still get the “European style flip design” and 2-megapixel digicam, as well as a fairly decent multimedia player to keep your head bobbing while riding the bullet train. The 804NK will run on the S60 platform that we all know and love, but some of the software is a little different. Don’t worry, it’s nothing completely out of the ordinary.

I’m guessing that pricing will be much the same as its European counterpart, placing the Vodafone 804NK (by Nokia) at around US$500.