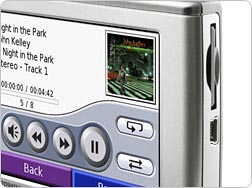 If you think that the picture provided looks eerily familiar, you’d be right, because that’s the old Nuvi 360 we heard about some time back. Garmin is ramping up on a successor to that model, dubbed the Nuvi 660, which ups the ante on several fronts but maintains pretty much the same look.

Currently jumping through some hoops over at the FCC test facility, the Garmin Nuvi 660 will be very similar to the 360 before it. In addition to the usual “find your way around town and avoid traffic in real time” thing, you’ll also be able to jam away to some tunes and vids along the way. Other notable features include Bluetooth for handsfree phone calls, an integrated FM transmitter (yay!), and a 480×272 touchscreen display.

No word on pricing, but if everything goes according to plan, Garmin will start selling these puppies by the end of next month.