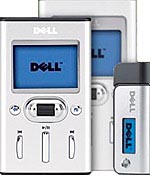 Dell really is having a tough time these days. Not all that long ago, we would have considered them as being on top of the world when it came to consumer-level computers, both desktops and laptops. We even started going bonkers over the gaming-centric XPS line of notebooks. More recently, however, there has been that whole controversy about exploding batteries, and now we hear word that Dell is abandoning their own brand of MP3 players.

That’s not to say that Dell won’t continue to sell digital audio players; it just means that they aren’t selling any of their own anymore. Instead, if you want to get your MP3 fix and insist on doing through the people at Dell, you can still grab Sandisk, Samsung, and iRiver players through their website.

The last hard-drive based player from Dell was issued by in February. The last flash-based DAP, the DJ Ditty, competed against the simpler, smaller players on the market like the iPod Shuffle. Needless to say, it didn’t fare all too well. No one ever really expected Dell to make a big splash in the MP3 market, and now no one ever will.