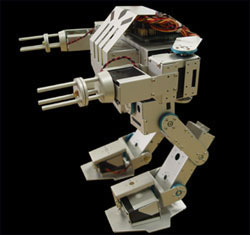 Here we have another programmable robot out of South Korea. This one has a not-at-all catchy name, D2V-ZN, and it’s from D2E Robotics. Still, if looks are what you’re after, you can do a lot worse than this one, which resembles nothing more than one of those giant blasting monoliths that the Empire wielded on the ice planet Hoth.

The one-foot-tall D2V-ZN has a built-in camera, so you can see things through the eyes of the robot. This can come in handy, especially when you tell the robot to go and spy on your sister and her slumber party.

The big seller with the D2V-ZN, however, is expected to be the customizability of commands. The accompanying software will allow you to create your own commands. The robot recognizes a few basic ones, of course, but it will be limited only by your imagination.

Launch point is expected to be October, and price point is thought to be about US$750. Of course, the initial market will be South Korea; we are confident, however, that the D2V-ZN will make its way to Europe and the U.S. sometime in the coming year.