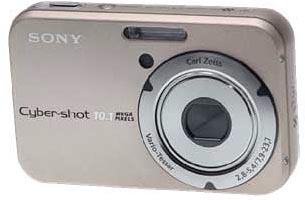 The crew at i4u.com came across a tasty little tidbit during their daily rounds in a Chinese discussion board. How much weight you put into this report is up to you, but it seems that Sony is gearing up to release their follow-up to the touchscreen-sporting DSC-N1. The appropriately named DSC-N2 ups the ante on several fronts, including a unique pinkish, purplish, silver-ish exterior. Yummy.

Whereas the N1 had but an 8 megapixel imaging sensor, the N2 is said to rock a full 10.1 megapixels of high resolution picture taking goodness. It will throw down the same (or similar) 3-inch touchscreen interface as its predecessor, as well as the fairly standard 3x optical zoom that we see on just about every digital camera these days (except this one is of the Carl Zeiss Vario Tessar variety). Other key features include ISO 1000 sensitivity and an attractive, slim design.

Of course, this could just as easily be yet another Chinese knockoff, being branded as a Soony or something.