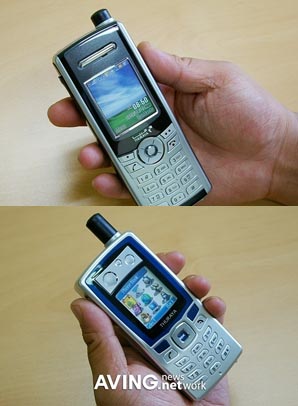 Asia Pacific Satellite Industry has got a couple new cell phones coming off the assembly line, but their handsets of a different breed. Both the SG-2520 and SO-2510 can hop onto “artificial satellites”, allowing you to stay connected regardless of where you happen to find yourself, be it among the mountains of Tibet, deserts of Iraq, or in the middle of the Atlantic Ocean.

The SG-2520 brings a little extra to the table, as it is also capable of doing the usual GSM dance we’re used to seeing, making it a “dual-mode (GSM/satellite) mobile phone.” Interestingly, it comes with all the multimedia pizzazz that regular phones have as well, including GPS, MP3 playback, Bluetooth, a 1.3 megapixel camera, and a 2-inch color LCD. They are saying that this phone is particularly well suited for Middle East applications.

If you don’t need regular GSM cellular telephony, then have a peek at the satellite-only SO-2510. According to Asia Pacific Satellite Industry, this is the first satellite mobile phone available in the Korean market and is among the smallest available anywhere, thanks to its relatively minute antenna. No surprising bells and whistles here, though, unlike the SG-2520. The 150 gram candybar does pack GPS, though.

Both phones come with long extendable antennas to ensure the best reception possible.