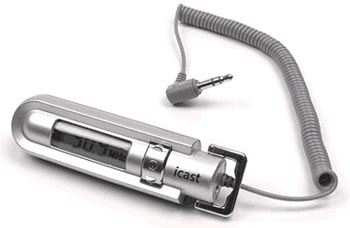 iStuff has unveiled a new iPod accessory in the UK which has caused a bit of a controversy. Their new iCast is a dongle that acts as an FM transmitter for your iPod, as well as your PSP or any other portable gadget that you would like to be able to broadcast to your FM radio for easier hands-free or group listening.

The iCast, which weighs just 30 grams, plugs right into the 3.5 mm earphone jack, and has its own power source, via a single AAA battery which provides 18 hours of broadcasting. No battery draining here. The tiny unit measures just 8.7 x 2.2 x 2.3 cm, and it will cost about $57 when it is released in the UK.

The reason that something so seemingly innocent is controversial is that low range FM broadcasting is currently illegal in the land of fish and chips and warm beer. That is due to change sometime soon thanks to new legislation, and iStuff is obviously optimistic that that change will come sooner rather than later.