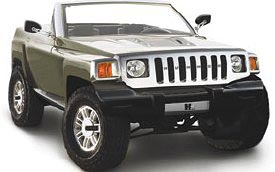 I thought that people who bought Hummers did so because they wanted a vehicle that was ridiculously huge and impractical, you know, to prove how cool they are. It doesn’t make sense to me, then, that Hummer may be eyeing and even smaller version of the former military vehicle in future years.

Reports are coming out that say that GM is eyeing a new Hummer that would likely be the size of a Jeep Wrangler and would probably be called the H4. The vehicles could show up as soon as the 2009 model year. The H4 would be entering a segment that Jeep has dominated (and largely had to itself) for a long time.

That may be the biggest change coming from Hummer, but it isn’t the only move being reported. There could also be a new H3 with a V8 coming in 2007 and a GMT-900 platform for the H2 in 2010.