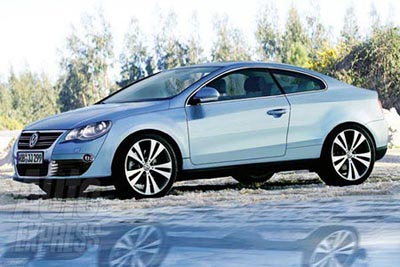 Volkswagen enthusiasts have been waiting for the Scirocco revival for quite some time now and it seems like we’re getting that much closer to the launch, as some new pics and deets have popped up on the blogosphere. It’s still making its rounds as the “Concept S”, but everyone and their mother is calling it a ‘rocco, so I’m going to do that too.

Set to make its debut at the Paris Motor Show later this year, the 2008 VW Scirocco is based on an all-new platform, which we will also find under the upcoming Golf Mark VI. That said, the Golf is for the city dweller to get groceries and pick up the dry cleaning. The Scirocco is meant to be a sports coupe, and as such, will be receiving upgraded suspension and racier “ride characteristics.”

Under the hood, we should be expecting either a 2.0 TSI (or 2.0T FSI; we’re receiving conflicting reports) to power this Scion tC look-alike. That might not enough power for true racing enthusiasts, so that’s why VW is probably working on plunking a 3.2-liter V6 in there somewhere down the road. For the Europeans in the crowd, their rendition of the new Scirocco will likely also be available with a 170hp turbo-diesel.

No word on pricing, but all indications point toward a mid-to-high $20,000 price range.