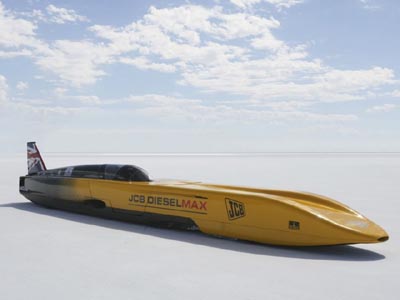 The JCB Dieselmax is a British-engineered phallic-looking vehicle which was built with the goal of breaking the land speed record for diesel vehicles, which stood at 235 miles per hour. After initial testing at an airport in England achieved speeds topping 200 mph, the team packed the car and all the accessories onto a Boeing 747 to head to the ultimate speed destination: the Bonneville Salt Flats.

The official record won’t be set until it is measured by two different groups, the Southern California Timing Association and the Federation Internationale de l’Automobile, which will occur next week. That said, you might as well engrave the trophy now, because the old record is all but obliterated.

The 750 horsepower JCB Dieselmax managed, in early trials, to hit an average speed of 308.252 miles per hour over the length of a mile. Needless to say, the team is thrilled with the test, especially since they were not at full speed. They have a way to go for the overall land speed record, though – it has stood at 763 mph since 1997.