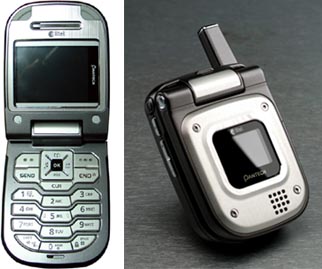 I remember receiving an email several months back from a company PR official, commenting on one of my posts here on Mobile Magazine. In that article, I said something along the lines that Pantech is a little-known name outside of their home country. This representative fired back, and said that Pantech will be making huge efforts this year to get some worldwide recognition. Boy, did they follow through.

They just announced a new handset for Telus Mobility in Canada, and now Pantech is unveiling the PN-218 ultra-small flip phone for the folks in the United States via Alltel Wireless. The PN-218 is said to rock a “chiselled exterior, with a rugged, hardy appearance.” Maybe so, but it’s pretty darn small at only 3.02 x 2.15 x 0.96 inches.

Like the C300 offered through Cingular, this phone’s biggest selling point is its size, but the PN-218 actually has some decent features under the hood. You get a VGA camera, as well as ringtone shuffler, picture ID, Axcess mobile web, BREW 2.1, and speakerphone. No pricing information at this time.