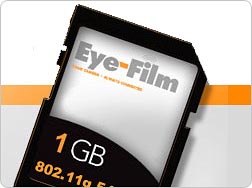 Remember when SD cards were considered the smallest portable storage solution out there? And then we came across miniSD and, later, microSD? Now that technology has moved along, engineers are better able to exploit the “extra” space found in a standard SD card. The team at Eye-Film have taken a standard SD card, packed in a full gig of storage and — much more notably — WiFi connectivity. In fact, there’s an 802.11g wireless chipset in there.

Previously, getting your WLAN on with an SD card required that ugly extra bulk at the end (SDIO cards), and they were designed for use on PDAs and smartphones. As such, you couldn’t possibly use those cards on certain devices that had more “internal” SD slots, like digital cameras. This new innovation from Eye-Film eschews the extra bulk, and gives you high-speed WiFi in a standard SD card form.

At this time, they’re working on letting you use the WiFi card — which happens to have a full gigabyte of storage in its own right, maintaining its ability to stash your data — for photography applications, though they may implement similar solutions for us in PDAs and smartphones down the line. No word on pricing.