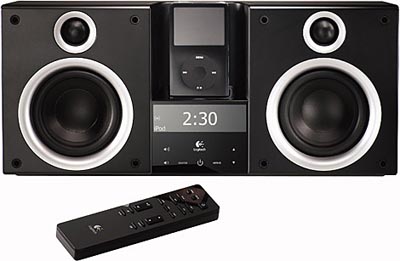 Another day, another iPod docking station. This one, the AudioStation from Logitech, is pretty impressive though, and it is clearly competing with higher end, higher performance units like the Bose SoundDock and Apple’s own HiFi boombox.

Unlike most docking stations, the AudioStation has an integrated AM/FM tuner. The touch sensitive controls which make the unit do what you want it to do are backlit, so you can rock out in the dark. You have choices, too – a 3.5 mm auxiliary input lets you add an external audio source, and both a composite video output and an S-Video output ensure you aren’t stuck just listening to music if you don’t want to be.

If the Logitech AudioStation sounds good but it is too big for your tastes, there is also a smaller, portable AudioStation Express available. The full sized model, which will be black, will be available in October for $299.99. The smaller version will cost $129.99.